I worked through an interesting problem today occurring with Desired State Configuration tied into Azure Automation.

In this scenario, Azure Virtual Machines are connected to Azure Automation for Desired State Configuration, being configured with a variety of resources. One of them is failing, the “Disk” resource, although it was previously working in the past.

The PowerShell DSC resource ‘[Disk]EVolume’ with SourceInfo ‘::1208::13::Disk’ threw one or more non-terminating errors while running the Test-TargetResource functionality. These errors are logged to the ETW channel called Microsoft-Windows-DSC/Operational. Refer to this channel for more details.

I need more detail, so lets see what the interactive run of DSC on the failing virtual machine. While I can view the logs located in “C:\Windows\System32\Configuration\ConfigurationStatus”, I found that in this case, this doesn’t reveal any additional detail beyond what the Azure Portal does.

I run DSC interactively with this command:

Now we can see the output of this resource in DSC better:

This isn’t very useful on it’s own, but the error does lead to an issue logged against the StorageDSC module that is directly related:

The “out-of-resource” test that ianwalkeruk provides reproduces the error on my system:

Running this on my system produces a similar error:

There does happen to be a known issue on the Disk resource in GitHub with Get-PartitionSupportedSize and the defragsvc:

Looking at the event logs on my VM, I can see that the nightly defrag from the default scheduled task has been failing:

The volume Websites (E:) was not optimized because an error was encountered: The parameter is incorrect. (0x80070057)

Looking at the docs for Get-PartitionSupportedSize, there is a note that says “This cmdlet starts the “Optimize Drive” (defragsvc) service.”

Based on timing of events, it appears like defrag hasn’t been able to successfully complete in a long time, because it’s duration is longer than the DSC refresh interval – when DSC runs and eventually triggers Get-PartitionSupportedSize, it aborts the defrag. Even running this manually I can see this occur:

At this point, I don’t know what it is about a failed defrag state that is causing Get-PartitionSupportedSize to fail with “Invalid Parameter” – even when defrag isn’t running that cmdlet fails.

However, in one of my systems with this problem, if I ensure that the defrag successfully finishes (by manually running it after each time DSC kills it, making incremental progress), then we can see Get-PartitionSupportedSize all of a sudden succeed!

And following this, DSC now succeeds!

So if you’re seeing “Invalid Parameter” coming from Get-PartitionSupportedSize, make sure you’ve got successful Defrag happening on that volume!

At my company we get a certain number of seats of Visio volume license from our Microsoft Partner benefits, but it is not a subscription product and the volume key cannot be simply entered to activate Visio, because our Office 365 is installed as O365ProPlusRetail.

Here I’ll describe how to install the Visio volume license product side-by-side with our standard installation of Office 365, which is a supported scenario according to this Microsoft doc.

At first I had problems where installing the product “VisioPro2019Volume” would downgrade my O365 build to the 1808 version. I posted a comment on this Microsoft Docs issue because it seemed related, and received a very helpful reply from Martin with another Microsoft Docs page describing how to build lean and dynamic install packages for O365. This was the key to configuring my XML file for proper side-by-side installation.

I also used the super helpful Office Customization Tool in support of figuring this out.

Just a quick post to document how to make a change with System Center Virtual Machine Manager.

I have a VM with a NIC attached to a VM Network that has a Static IP Pool. For a few not-so-great reasons, I need to remove it from that pool back to a Dynamic IP address.

In the GUI, this option is disabled: 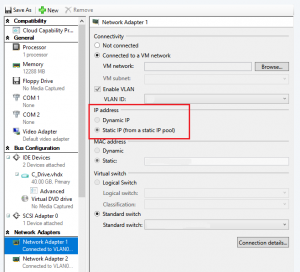 Here’s how to accomplish it with PowerShell:

I’m running Windows 10 insider preview on my basement computer at home, and sometime in the middle of summer it started failing to update to the latest release. I finally made some time to troubleshoot this last night and got it working.

During the install, it would get about 40% of the way through, and then fail with this error: 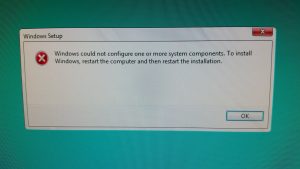 After some sleuthing I discovered the log file for the upgrade could be found here: C:\Windows\Panther\NewOs\Panther, and I looked at the “setuperror.log” file.

In this, there were a couple of key errors noted:

I did come across a search hit when looking for the “uicciso.dll” error that spoke about IIS install failing with a Windows 10 update, and those two things seemed to correlate with the errors I was seeing in the logs.

I ran this DISM command to see the additional Win10 features that were installed, and noted a whole bunch that I don’t ever recall having put on manually, and certainly weren’t needed:

I collected a bunch, turned it into a removal command, ran them and restarted:

After the restart I let the upgrade run, and it completed successfully!