After a significant amount of time envisioning a DevOps pipeline, hearing about them, reading about them on Twitter, and watching other’s create them I finally made some time to get some hands on experience. I chose to work my Azure DSC configuration deployment into a pipeline, which I’ll blog about sometime in the near future.

First, I ran into an almost immediate question: what is the difference between a Pipeline, and a Release? 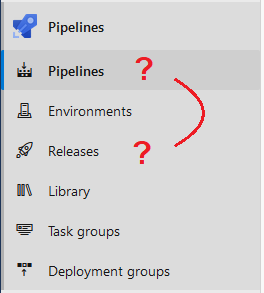 From previous reading, I had learned that Continuous Integration (CI) was related to Build pipelines, which the first item in the menu was previously called. Then subsequently Continuous Deployment (CD) was a Release pipeline and separated to its own menu item.

However when I started playing around this week, what I found was a very confusing similarity between the two.

I could make a Pipeline with YAML or a classic editor, both including tasks and steps for build and releases, and when I went to save it would store a YAML file in my connected repository. This covers CI/CD in full and left me wondering where Releases fit.

I could also create a Release pipeline, in a graphical format only, with an Artifacts and a Stages section that seemingly had no connection to a repository other than creating a runtime artifact from one.

Reading the excellent Azure Docs for “Use Azure Pipelines“, it shed a little bit more light on this:

In short, the concept of build AND release pipelines are now effectively the Classic mode of Azure Pipelines, with the new hotness being a single pipeline, created through YAML and stored as code within a branch in your repository.

I understand why Microsoft has not fully removed the classic method, but it does take some time to understand for someone like me jumping in during the middle of a transition.

As it stands right now on the Feature Availability table, it looks like Deployment Groups and Gates are the only features that that YAML pipelines are not able to do compared to the classic Release pipeline.

I recently listened to and really enjoyed this podcast episode from Scott Hansleman: “Myself. Its not weird at all”

In it, he touches on such a wide range of concepts: discipline and consistency, doing what you love, “Yes, and” instead of “no” as a redirect. He talks about deliberate practice, imposter syndrome, mindfulness, commitment to what is important, and making time.

Some choice quotes that really resonated with me:

Programmatic deployment of Azure Site Recovery for Azure VMs – that’s the target I started with for a project a little while ago.

There is a large amount of information for Azure Site Recovery on Microsoft’s Docs, however the amount of available code online to programmatically deploy a full setup is very sparse! Much of what Microsoft provides is PowerShell, which isn’t idempotent and doesn’t fit with my current tooling (Terraform and declarative infrastructure-as-code). I did consider Azure CLI, but couldn’t find any references for Site Recovery.

While working on this I came across an Azure Quickstart which is a little incomplete and starts with some good variable definition but quickly devolves into hard-coded values from where it came from; I also discovered a blog post from Pratap Bhaskar  which was useful especially for understanding the Loop mechanism in the template, but it didn’t go far enough for my purposes.

So I spun up a few VMs, manually configured ASR, and did an ARM template export. What I received was a huge amount of properties on the resources that I was sure were relevant to runtime only, not creation. This was also a good reference, but not exactly where I needed to be.

The final piece of the puzzle that got me on my way was the REST API docs for Site Recovery. With this in hand, and the other sources I had at my disposal, I had the references I needed to begin putting together an ARM Template that would configure my environment end-to-end including Recovery Plans with automation runbooks.

There are a lot of design decisions I made when building this to fit my environment, some of which won’t make sense without additional context; most of which I can’t provide. That’s ok, as I hope it at least serves as a reference for “what’s possible” to others who come across it. Here is the overall structure: 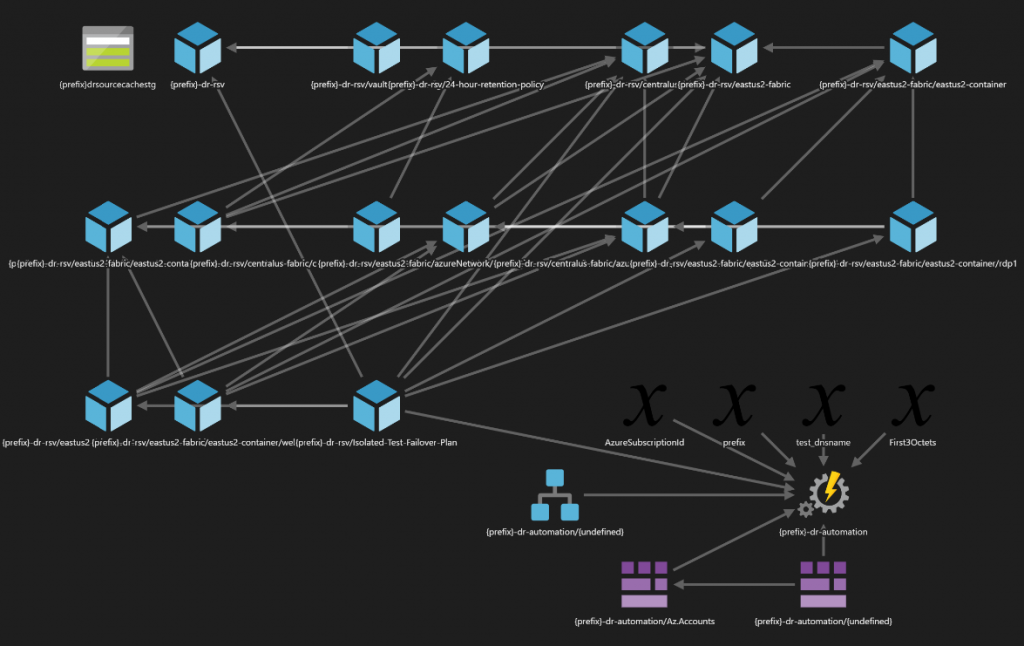 The majority of my time was actually spent cleaning up the template into proper parameters and variables for effective re-use, and then solving all the syntax challenges and typos that come along with that.

There are still some loose ends in what I’ve created, around certain manual steps still required. However as I’m sure is common in the industry, it is good enough to deploy and I must move on – fine-tuning comes later.

While working with the Invoke-AzVmRunCommand cmdlet, I encountered a problem, receiving the following error:

I’m attempting to push a DSC configuration into a VM and run it, and although the PowerShell runs successful when run from inside the VM, I still see this error.

I came across a github issue with a helpful tip: the log output of Invoke-AzVmRunCommand can be viewed from this path:

This helped me determine what the problem was and how to solve it.