I want to produce two Azure Private DNS Zones, with records inside each of them, but conditionally. Think of it as ‘zones’ – zone A and zone B will be unique in their identifiers, but have commonalities in the IP addresses used.

I want do to this conditionally (a zone may not always exist) but also without repeating myself in code.

Lets start with a variable Map of my zones:

Here I’m creating an object that will work with for_each syntax. You’ll note I’m including additional attributes that are unique to each zone – this will come in handy later.

This variable allows me to create my Azure DNS private zones like this:

This is using the “each.value” syntax, referencing the attributes of each zone. This terraform will produce the Private DNS zones described in the image above.

Now I want to populate each zone with records.
First, I’m going to use a local variable (could be a regular variable too) that will create a map of keys (common parts of server names) and values (last octet of the ip addresses):

For each zone that I have (a or b), I want to create a DNS record for each key in this map (hence the double for_each). Terraform won’t let you combine a for_each and count, and it doesn’t natively support 2 for_each expressions.

After a lot of trial and error (using terraform console to test) I came up with the code below. This article with a post by ‘apparentlysmart’ was a big help in the final task and helped me understand the structure of what I was trying to build.

I need 2 new local variables. The first will produce a flattened list of the combinations I’m looking for. And then since for_each only interacts with maps, I need a second local to convert it into that object type.

Then I can use that second local when defining a single “azurerm_private_dns_a_record” resource:

This is where the magic happens. Because my map “zonedips-map” has attributes for each object, I can reference them with the ‘each.value’ syntax. So the name field of my DNS record will be equivalent to “${zones.zonename}${servername}”, or “aweb/bweb” as the for_each iterates. To place these in the correct zone, I’m using index selection on the resource, within the “zone_name” attribute – this says refer to the private_dns_zone with the terraform identifier “zones-privatedns” but an index (since there are multiple) that matches my version name.

This is where terraform console comes in real handy; I can produce a simple terraform config (without an AzureRM provider) that contains these items, with either outputs, or a placeholder resource (like a file).

You can then explore and display the contents of the variables or locals by calling them explicitly in the console:

So we can display the contents of our flattened list: 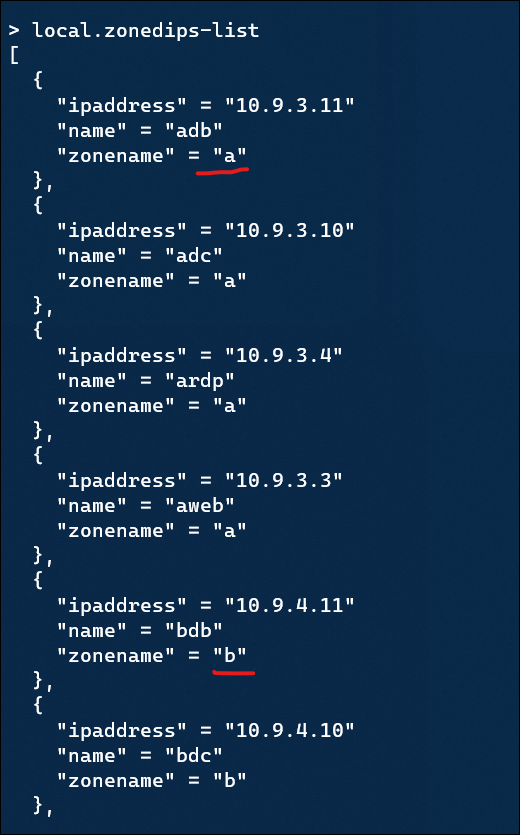 And then the produced map: 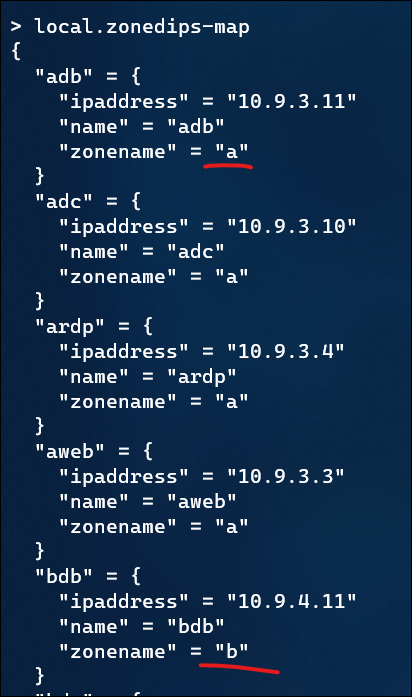 Finally, we can do a “terraform plan”, and look at the file resources that would be created (I shrunk this down to just 2 items for brevity): 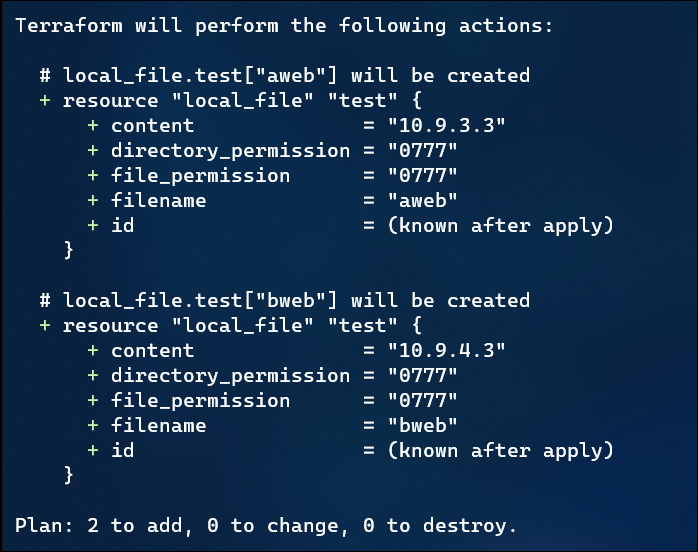 You can see the key here in the ‘content’ and ‘filename’ attributes.