I use Windows Deployment Services (WDS) under Server 2008 to deploy images of Windows 7 x64 over PXE to my desktops and laptops.

I’ve standardized on Dell Latitude and Optiplex computers, so I want these drivers to remain in place after the sysprep, so they don’t need to be added later.

Apparently Server 2008 R2 WDS has the ability to add drivers through the GUI, but I don’t have that luxury yet. Here’s how I’ve gotten these drivers into my image.

The major prerequisite is that you’ll need the Windows AIK tools installed on your server. They can be found here:

Note: you’ll need to have extracted folders of each driver you wish to inject, with the .INF file available. For each model, put all your drivers in it’s own folder under the master one. For example:

First, open the WDS console, and export the image you want to modify. Right click on the image, and choose Export. Export it to D:\ExportedImages 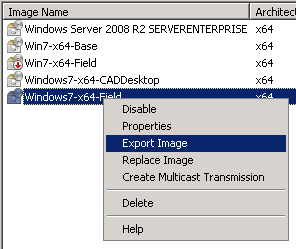 Then, from an elevated command prompt window, run the following (two separate lines):

Use the following command template to inject the drivers for each system:

When completed, run this command:

Now re-import the image, either by adding, or replacing the existing one from the right click menu. 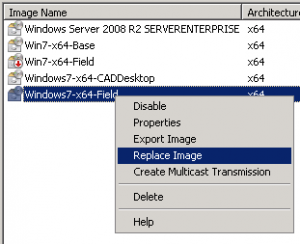