While working with a report for SSRS 2005, using the Business Intelligence Development Studio, I’ve used the option to “Jump to Report” very often. You can find this by going to the properties of an object (textbox, cell, etc) and the Navigation tab. 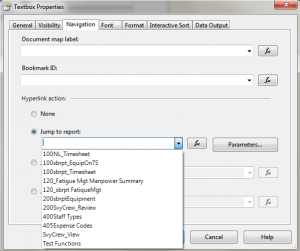 The problem I encountered today is that the drop down shown above only displays reports that existing within the current project loaded in Visual Studio. This means if you have a common report used as a drill through, a copy would need to be made inside this project which is obviously a bad idea since multiple copies would need to be updated.

However after a bit of searching I’ve found that you can specify the folder (as it appears on the Report Server) that your sub report exists in, and it will function correctly. 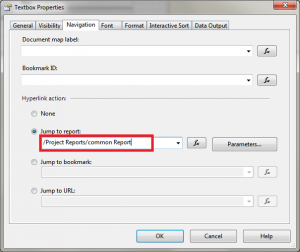 By doing this, you can maintain one copy of your common reports, and just reference them from the folder name.

Note: this won’t work while previewing the master report in Visual Studio unless you have deployed the drill through report to the report server.

As a related aside, I have started organizing my reports all within one Solution in Visual Studio, each under separate projects. Prior to this I had one Solution and one Project for each set of reports, which didn’t scale very well and doesn’t allow for easy referencing. Now, I can get at them all at once:

3 thoughts to “SSRS – “Jump to Report” in a different project”