I recently had a need to benchmark some Azure VMs, as I’m looking at Azure Storage Fuse and want to evaluate where bottlenecks in performance might be. I’m mostly saving this as a reference so I can come back to it again in the future.

The ‘fio’ tool can be used to perform this benchmarking. I found this originally from an ArsTechnica article.

First, need to create a profile that fio will use. I created a few different ones for different scenarios; mostly around the disk target based on the directory attribute of each reader.

I saved this file to /tmp/fioread.ini. This will give me a test reading a 1GB file with a block size of 512k and iodepth of 8 in a random pattern. 4 readers are configured to maximize throughput.

Then, I called fio with this:

This runs the test for 60 seconds, and the –time_based ensures it runs for the full time even if the dataset size has been processed (loops back around and begins again).

When I start the command, it will layout files as defined in the .ini file you’re using

Then it immediately goes into the test, and after 60 seconds, produces results.

Each reader will have it’s own block of stats, with a summary at the bottom: 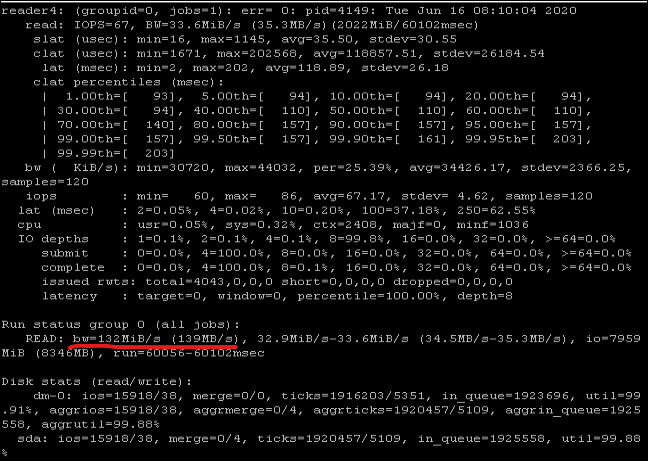