Azure Automation runbooks are very useful – particularly for scheduled or repeated operations. One downside I have observed is that they are very often disconnected from proper version control.

Microsoft has a solution for this: source control integration

You can connect a GitHub/Azure Repo to an Automation Account, which uses resources like RunAs accounts, personal access tokens (from your repo), and automation jobs to perform the sync.

I began evaluating this for the purposes of importing, publishing, and scheduling some runbooks, however there were two key reasons I felt a different direction was better suited:

There are a few different ways that runbook management could be accomplished in an Azure DevOps pipeline: Azure PowerShell, ARM templates, Azure CLI.

For simplicity and speed of development, I chose to use Azure PowerShell, combined within a YAML pipeline definition.

My use-case here is taking my Update Management scripts and making them run automatically on a schedule. Based on that, I have the following structure in my repository:

New-UpdateManagementSchedule.ps1 calls Get-AzCachedAccessToken.ps1 in order to use an existing Az PowerShell context to create a bearer token and authenticate against Azure REST API with it (where I’m using Update Management endpoints).

Publish-AARunbookFromDevOps.ps1 is my script that gets called within the DevOps pipeline, to import and publish the runbooks to the automation account.

I want Set-UpdateManagementSchedule.ps1 to run once per month, because it calculates the appropriate timing of Update Management schedules. I don’t want any of the other scripts to have a schedule at all, since they’re just referenced at some point in time.

In order to make this all happen, I created a DevOps pipeline, stored within the “azure-pipelines.yaml” file.

The concept of storing the pipeline as code within YAML is very advantageous, however difficult to simply write from scratch. Often I will create a dummy pipeline in the GUI, using the Task Assistant (see below) and Azure DevOps task docs in order to understand the syntax and components of what I’m trying to achieve. 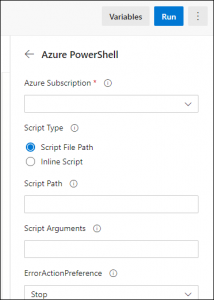 I can then take that YAML that has been progressively built, store it in my repository, and create a fresh pipeline and import using it.

In this case, my pipeline starts with a trigger definition, for which I learned and utilized path-based rules that Azure Repo supports:

This will ensure the pipeline only triggers when a runbook within the UpdateManagement folder is modified, rather than my whole repository.

Using the AzurePowerShell task, I can trust that authentication to Azure will be handled appropriately as long as I supply a service connection (shown as the “azureSubscription” property below).

For each Runbook that I want to handle in my pipeline, I’m calling the “Publish-AARunbookFromDevOps.ps1” script and supplying arguments related to that specific runbook. I wanted to break it out this way to give me the most flexibility to handle runbooks independently.

This script that is called is fairly static right now; I’m making a bunch of hard-coded assumptions such as “we will always overwrite the runbook if it exists rather than comparison checking”, and “every import needs a publish”, and “only 1 kind of schedule is going to be used”.

Limiting the schedule to my hard-coded values reduced the time-to-deploy this in my environment, because I didn’t have a need right now for further manipulation. This idea is related to “YAGNI” or “You aren’t going to need it” that I recently read about from Martin Fowler.

When the pipeline runs, it performs all it’s tasks in about 3:30 minutes 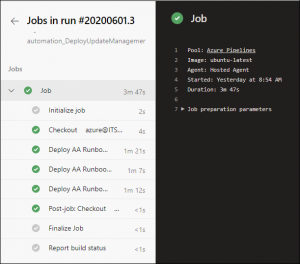 I can see that it has created a Schedule in my automation account, and linked it to the runbook:

Check out the README.md from the GitHub repo for details on re-using this code for yourself.

One thought to “Azure Pipeline for Automation Runbooks”