I’m playing around with an Azure Function that I’m going to eventually call from an Azure Automation runbook (post to come in the near future).

During this process, I learned some pretty key things as I was testing and going along. I’m a little embarrassed to post them publicly, but eventually a non-coder like myself somewhere is going to be trying the same thing and maybe this will help.

Function error-ing out during testing

In my function, I used a ForEach loop to add a string to a List<string> for each instances of a collection. My function would compile just fine but would always error out on this one line, with a really generic error. I only knew it was erroring out on this line because I placed a log output on the next line and it would never reach it.

This was my poor coding skills, not beginning the list properly. I was starting it like this:

But it really needed to be this to initialize it properly:
Without this, adding to the collection isn’t possible. I’m sure that anyone who actually knows C# is shaking their head reading this, but I guess that’s what you get when you learn organically without real training.

I want to pass in a parameter to my function, using the query string. At the same time, I also want to use a function key so that this can’t be run anonymously.

Originally, I was trying this, with the ampersand delineating the second query parameter (after the function key):

In PowerShell, this returned the error:

So I tried this string:

But then I received the error:

Well, I knew it wasn’t unauthorized because it ran properly in the browser. The actual fix was stupidly easy, I hadn’t put any quotes around the whole string – either single or double quotes was fine:

When I got to actually testing my function, I tried to call it from PowerShell in this format:

However, upon doing so I received this error:

A google search led me to discover that PowerShell by default will attempt to use TLS 1.0 for Invoke-WebRequest, unless you’re using PowerShell Core 6.

My Azure Function uses TLS 1.2 by default and as a minimum. This can be found on the “Platform Settings” page of the Function, under “SSL”: 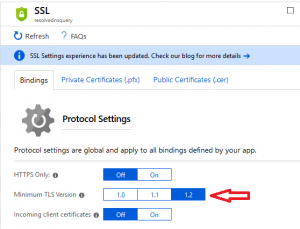 The solution (at least as a workaround) is to force that session to use TLS 1.2 like this:

Primary source for this information was here.