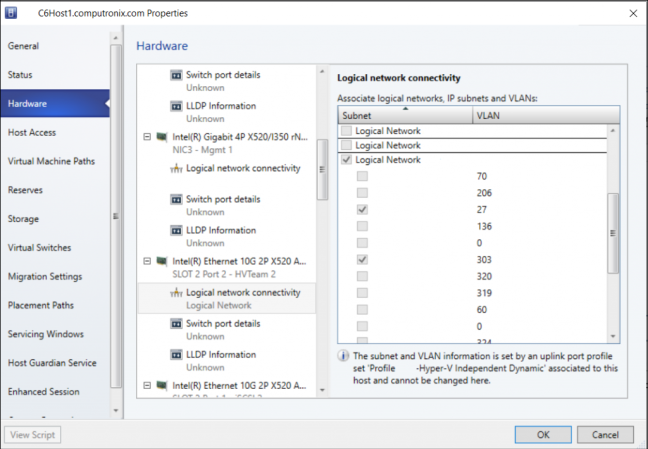 This post is a reference for needing to move an Azure Managed Disk between regions. It is based on this Microsoft Docs article.

There are legacy posts containing information to use Az PowerShell to basically do a disk export to blob storage (with a vhd file) and then import that.

This procedure skips those intermediate steps, and uses AzCopy to do it directly.

If there’s no active data changing on the disk, you could consider taking a snapshot and then producing a new Managed Disk from your snapshot to perform the steps below – this way you wouldn’t need to turn off the VM using the Disk. However, the situations where this might be viable are probably rare.

You will need to:

First, shut down and deallocate your VM.

Then open a PowerShell terminal and connect to your Azure subscription.

Then populate this script, and execute each command in sequence.

When you get to the AzCopy step, you should see results something like this:

In my experience, the transfer will go as fast as the slowest rated speed for your managed disk – the screenshot above was from a Premium P15 disk (256 GB) rated at 125 MBps (or ~ 1 Gbps).

Some background first – when working with an Application Gateway v2 sku, you can apply a WAF in 2 different ways:

Microsoft’s documentation appears to be updated to display a preference for using the WAF Policy object, including a scripted method for converting to it: Migrate Web Application Firewall policies using Azure PowerShell

I moved to using a WAF Policy because I wanted to use a series of Terraform local variables to supply WAF rule configuration (exclusions) to both Application Gateway and Azure FrontDoor WAF Policies, without duplicating code.

But there is a severe limitation that you may not have noticed in the docs:

You might think, “that’s not a problem, I shouldn’t ever need to disassociate my application gateway” but here’s where it gets wild.

Let’s say that you decide you under-sized your Application Gateway, and want to increase the maximum scale units, or set it to auto-scale. You go to the Configuration blade, and modify the setting, and then hit “save”. You will see this error: 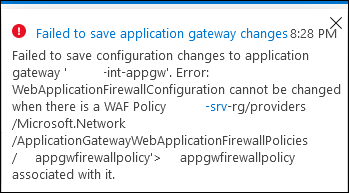 You can try to disassociate the policy in the Portal, but you’ll just see this:

What if we try to disassociate the Policy in PowerShell?

This is the limitation – once you’ve applied a WAF Policy, the only way to make a configuration change against the Application Gateway is to destroy it and re-create it. This is absolutely crazy, and means I will not deploy another WAF Policy object until it is resolved. Generally speaking one wouldn’t expect to be changing the AppGw configuration often, but being stuck like this not a good place to be in.

Other’s have talked about this like on ServerFault with a suggestion to shut down the AppGw (not effective) or this issue on azure-cli describing the limitation. To date I haven’t found any viable workaround.

“terraform console” is a command you can run, which gives you the opportunity to evaluate expressions and interpolation – very useful while building terraform.

To use it, on the command line, navigate to your terraform folder, and then run

You will be met with this prompt (which doesn’t support any history through the “up” arrow key ?):

Here you can enter Terraform syntax and press enter to see the results.

Lets take a look at a resource group that exists in my configuration:

I entered in “azurerm_resource_group.mpn-trainlab-rg” and the console output all the properties in the state file for this resource.

I could further define my entry to a single property, and get this:

Now we can try this with some of our input variables. Lets say I have a complicated variable that I’m using to define disks, and I want to make sure when I reference that on a resource, its going to work:

If I enter “var.data_disks” in the console, I would expect to get the exact same output as the code above, in JSON notation (lots of extra quotes and colons).

What if I’m trying to get the size of just the ti-web disk?

Looks like it works! Now I know on the resource for the “size” property, I can use “var.data_disks.ti-web.size” as a reference and it will provide my expected value.

A quick note to myself on how to get terraform plan output as a file.

By default running a “terraform plan” will output a nice graphical display of all expected changes. Sometimes you want to be able to distribute this as a file. In the past, I’ve tried commands like:

Instead, you can do this to get better output:

Now it will display in the console, and produce a text file that looks like this: