I’ve begun poking around with custom Azure managed images, using Packer as an on-premises build source. The goal is to use the same image within an on-premises test environment and in an Azure production environment, and take a small step towards immutable infrastructure.

There are lots of interesting questions around this topic that may have unique answers in different environments. Here’s a few thoughts on what I see where I am right now:

Once I got to a place where an image is ready, I began poring over the Microsoft Docs on managed images and Shared Image Gallery, prior to testing.

I intended on a distribution flow something like this:

The documentation left me with a few unanswered questions, which I’ve outlined here:

Here’s a few other important design discoveries I’ve made along the way:

At the end of the day, I’ve come up with the following flow which builds and delivers my images:

I recently listened to and really enjoyed this podcast episode from Scott Hansleman: “Myself. Its not weird at all”

In it, he touches on such a wide range of concepts: discipline and consistency, doing what you love, “Yes, and” instead of “no” as a redirect. He talks about deliberate practice, imposter syndrome, mindfulness, commitment to what is important, and making time.

Some choice quotes that really resonated with me:

I was looking through my Google Drive recently, doing some cleanup and pruning. I came across a document I had created in June 2016, called “Job I want to have”.

I don’t remember creating this document at all. It’s contents are a job posting for an “Infrastructure Technology Analyst”, without any kind of reference to the original company. 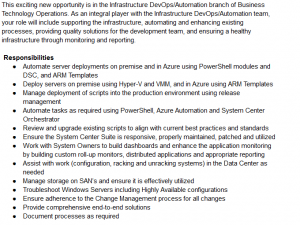 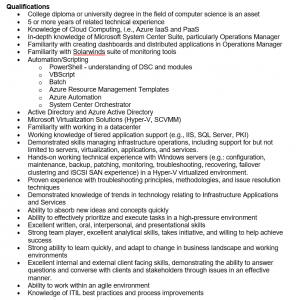 In June 2016 I was feeling stagnant; lack of motivation, lack of direction. I looked at this posting and thought that it was a huge stretch, and that it may be so difficult to actually achieve enough skill to be able to fill a position like this.

Now I’m reflecting on this, and realize that I have this job – I do all of these things right now, and it didn’t take a monumental effort. It wasn’t hours and hours of study time, or money for certifications and courses. I’m not saying I didn’t have to work hard to learn, or that it was random chance that put me here. It was certainly time spent learning, but by doing; by embracing the challenges as I faced them and learning how to solve them with the focus of a goal in mind.

What it really required was for me to step outside of where I was comfortable, embrace the fear of uncertainty, and try. Try something new and something different; try a chance that the grass could actually be greener.

I’m glad I came across this because I needed a refresh in my mind of what my goal was and understanding that I have achieved it. I needed a reminder that the core of what I’m doing now is still fun and drives me to have the kind of career I want to have.

Perhaps its nearing time to set my sights on something a little scary again.

During deployment of some resources with an Azure virtual network which has subnets with network security groups (NSG) applied, I made a new discovery that I didn’t previously know. It makes sense in the context of how Azure applies NSG rules, but it doesn’t align with a traditional understanding of firewall ACLs across a subnet.

If you apply a Deny rule that has a lower priority than the default 65000 “Allow Vnet inbound”, it will also deny resources within that subnet from communicating with each other.

I discovered this while applying a “Deny inbound” rule in order to restrict lateral movement between subnets, not intending to restrict traffic within a subnet.

For example, I have a “management” subnet, with an NSG applied. Inside this subnet is an AD domain controller, and a member server. I apply a Deny rule for any source, after my “allow incoming” rules have been applied to let other subnets talk to this domain controller.

Now I find that my domain controller cannot reach my member server, despite it residing within the same subnet.

As a general practice, outbound Internet access should be denied except for approved destinations. This is referenced in NIST 800-41 as a “deny by default” posture.

Achieving this within Azure Infrastructure as a Service in a practical and economical way without breaking a large amount of services is quite difficult at the moment.

If Outbound Internet is fully denied, some of the commonly used services of Azure will cease to work:

Some of these are not as difficult to solve – Service Tags on NSG rules can allow Azure services where they have been defined by Microsoft. As of Ignite 2018 in late September, there are new service tags covering entire regions, or all of Azure (“AzureCloud”). This means you can allow most of those services above to function and still deny general Internet outbound.

Additional Service Tags for Windows Update, or custom definitions are supposed to be coming in the future, but this doesn’t fully resolve the problem.

What if your application has a GIS component, and it needs to reach *.arcgisonline.com? What if your users have a legitimate reason to access a particular website? It isn’t good enough to just resolve that IP address one time and add it to an NSG.

What is really needed is a method to allow access to a fully qualified domain name (FQDN), particularly with wildcard support.

Here are some possible solutions:

This is the most common response that I see recommended to the outbound problem. Unfortunately, it is really expensive, and overkill if you’re only address this one particular problem. One has to consider high availability of the resources, as well as management of them since you’re just adding more IaaS into your environment, which is what we’re all trying to get away from when we’re using the cloud isn’t it?

Some vendors may not support wildcard FQDN in it’s ACLs (Barracuda CloudGen last I checked), which means you can’t support things like Windows Update where no published IP list exists.

If the implementation is anything like SonicWALL’s method, it will have difficulty being reliable – this relies upon the SonicWALL using the same DNS server as the client (calling it ‘sanctioned’) which may or may not be true in your Azure environment with the use of Azure DNS or external providers.

Azure Firewall is new on the scene and released to General Availability as of late September 2018. It supports the use of FQDN references in application rules, and while I haven’t personally tested it, the example deployment template is shown to allow an outbound rule to *microsoft.com.

Confusingly, their documentation states that FQDN tags can’t be custom created, but I believe this just references groups of FQDN, not individual items.

Azure Firewall solves the problem of deploying more IaaS, and it’s natively highly available. However it again isn’t cheap, at $1.25/hour USD it is a high price to pay for just this one feature.

Wait until FQDN support exists in an NSG rule

It has been noted on the Microsoft feedback site that NSG rules containing FQDN is a roadmap item, but since this hasn’t received the “Planned” designation yet, I expect it is very far down the roadmap; particularly considering this feature is available in the Azure Firewall.

I’ve toyed with the idea of building a custom Azure Function or Automation runbook which can resolve a record and add it to an NSG. I’ll have a post on the Function side of this coming soon that describes how it would work, and the limitations that made me discard the idea.

Realistically, this isn’t a long-term viable solution as it doesn’t solve the wildcard problem.

This method involves trusting some other source to proxy your outbound traffic and depending on that source, gives a large amount of flexibility to achieve the outbound denial without breaking your services.

This could be an IaaS resource running Squid or WinGate (a product I’m currently testing for this purpose), or it could be an external 3rd party service like zScaler which specializes in access control of this nature.

To make this work, your proxy must be able to be identified by some kind of static IP to allow it through the NSG, but after that the whitelisting could happen within the proxy service itself.

I see this as the most viable method of solving the problem until either FQDN support exists for NSG, or Azure Firewall pricing comes down with competition from 3rd party vendors.